How To Make A Fidget Spinner – An Easy Guide For Beginners Every so often, a craze comes along that takes America by storm. We’ve seen kids obsessed with silly bandz, Furbys Tamagotchis, Tickle Me Elmo, Beanie Babies, and many more. When something reaches craze level, kids will do just about anything to get it. Parents camp outside of toy stores and wait in long lines. The latest of these toy crazes is the fidget spinner. They don’t seem like something that would interest a child. A toy that just spins feels like something that went out of fashion with the top and wooden toy cars. It feels like an interest from another era. But the little spinning toys have taken over the world. Or at least the toy aisle. They come in every style, color, and price point, but if you’re the inventive sort, we can show you how to make a fidget spinner.

What Is a Fidget Spinner? The origins of the fidget spinner are a bit ambiguous. Some have tried to date it to a patent filed by Catherine Hettinger in 1993. Her “spinning toy,” however, really doesn’t look like a fidget spinner. There’s also the story that Scott McCoskery invented a spinning toy to help him deal with his fidgeting during meetings. Wherever it came from, the fidget spinner has been wildly successful.A fidget spinner is a toy or device that is made of a ball bearing in the center of a multi-lobed structure. They can have differing numbers of lobes. They’re made from metal or plastic and spin on the center axis with very little effort. Because they occupy your hands and are repetitive, they have been sold as stress-relieving devices. They are also said to help with neurological disorders like ADHD and autism. There’s no scientific data to prove this, but anecdotal evidence states that it helps people.Fidget spinners come in hundreds of shapes and styles now. The original spinner had 3 lobes and a bearing in the middle. It would spin, like a fan, around the center axis. New models have varying numbers of lobes and come in tons of different colors. They also make spinners that are round, have spikes, and have smaller spinning features inside the lobes of the larger spinner. Fidget spinners can come in cube form, or be shaped like flowers, bats, cogs, spiders, and anything else you can thing. There are endless possibilities. This is why, when we look at how to make a fidget spinner, there are very few restrictions.Fidget spinners have become collector’s items as well. There are people who collect the rare and very interesting spinners the way some people collect stamps or coins. They’re also used as promotional items. Companies can have their name or logo printed on spinners as gifts.

Fidget spinners are sold on Amazon and at most major retailers. They can be purchased for a little as $5 and as much as $500. You can buy whole lots of them and get 5,000 at a time. There are fidget spinners made of precious metals and gemstones. There’s a fidget spinner at every price point.

As you can imagine, fidget spinners have become an issue in schools. As with any toy that’s very popular, every kid has one and wants to show it off. Children started bringing spinners to school and playing with them in class. This obviously became very distracting, and some school banned them from being on campus. However, some teachers saw the spinner does help children with focus or anxiety problems. Those teachers set specific rules, including restricting spinner to being held in the student’s lap, and saw good results. The fidget spinner is an example of how a toy can be used as an educational aid. Some school have since lightened their restrictions and others have not.

Why You Should Make Your Own Fidget Spinner The reasons for making a fidget spinner are as endless as the reason to be creative. Designing a fidget spinner can teach you everything from art and design to engineering and physics. Understanding how to parts fit together to balance the spinner and allow is to speed unimpeded are a less in engineering and the laws of physics. Creating the shape and seeing how that impacts its movement and performance is another science lesson. Finally, choosing materials, colors, and texture lets you explore art and design. All of the elements will affect your finished fidget spinner.Another reason to make your own spinner is because you can’t find one that suits your needs or your taste. Perhaps you have an idea for an improvement on the design or you want to make a change so that it will fit better in your hands. Maybe you need a different speed or motion to help your anxiety. Creating something that is uniquely yours and works for you is always a valid endeavor.Finally, learning how to make a fidget spinner is a great way to start a business. If you perfect your skill and make a product that other people enjoy, you could take a piece of the fidget spinner market. You could make and use fidget spinners in a larger art project. There are so many reasons to make your own spinner. If you have no other reason, learn how to make a fidget spinner because they make people smile.

How to Make a Fidget Spinner You can learn how to make a fidget spinner out of things you have at home or can easily obtain. Essentially, you need a center point around which other parts can rotate. The parts need to be weighted to give it the proper weight to rotate around the axis. You’ll also need something to use as the axis. As long as you have these components, you can make a spinner out of almost anything. If you don’t have the money for a spinner or you just want to get creative, here are some instructions for how to make a fidget spinner. You can make a fidget spinner out of plastic bottle caps. The following list is the supplies you will need to get started, followed by the instructions for making your spinner.

Locate 4 plastic bottle caps. Place one in the middle and glue the other three so they all touch the center cap and are evenly spaced apart.

Use pennies as weights and glue them inside the bottle caps. You could also use magnets or other flat, heavy objects.

Cut out 10 circles the same size as the bottle cap from a cereal box or another cardboard object. Use a toothpick or other sharp object to poke a hole through the exact center of all the cardboard circles. It’s important that all the holes line up correctly.

Glue the circles with the holes punched and aligned into 2 stacks of 5. Then, cut two more circles of the same size but without a hole and glue them to one side of each of the stacks of 5 circles.

Press a toothpick into the hole of one of the stacks of circles. Then, poke the toothpick through the center bottle cap from earlier. Cut the toothpick just short enough to glue the other stack of 5 circles onto the opposite side of the toothpick. Once it’s all dry, it should spin!

Use creative supplies like glitter and markers to decorate your spinner. These instructions are for how to make a fidget spinner out of skateboard bearing. The following is the list of supplies you will need as well as the instructions.

Take you 3 skateboard bearings and line them up horizontally. Remove the middle protector with an X-Acto knife so you can see the wheel. Glue the bearings together with super glue and let dry.

Wrap a rubber band around the outer edge of the bearings and decorate it to make it look good. When you hold the spinner by the center bearing, it will spin.

You can also use 4 bearings and remove the protector from the center bearing. Glue the other 3 evenly around the outside.

Although fidget spinners began as kids’ toys, many adults have started collecting them and enjoy how soothing they can be. Some children do, in fact, use them to calm their anxiety or ADHD. Although we may not know exactly where the fidget spinner began, it has a had a huge impact on the US economy. They’re fun and they inspire people to get creative. They’re affordable, unless you want one that’s a collector’s item or made of solid gold. All around, they’re a harmless craze that has inspired a lot of people to be creative. And the craze has come full circle, because now you know how to make a fidget spinner. 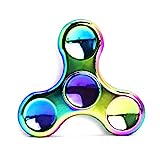 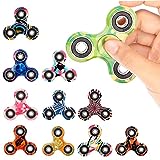